Nothing like having to maneuver around the house between piles of laundry because the washing machine won't be delivered until mid February :/  I was going to pull the money back from it and just go 50 minutes away and grab one off of the floor of the nearest home depot but they said it doesn't work like that and it would be 8-10 days before it hit the store. I really thought there wouldn't be a problem with all this until dinner with a couple of women in town the other night. They said crime has shot up around here and Jim also doesn't want me venturing off to do laundry alone. I found myself in JC Penney's an hour out buying clothes and ordering another duvet until he can escort me or the washer comes in :/

So Paros and I are healed but it took almost 2 weeks to run down a flu shot since my doctor was out. So were the pharmacies, grocery stores, and anywhere within 2 hours according to flu.gov site. I just called up to the clinic here (the one I am trying to avoid because they have issues with me making an appointment to the one and only doc in town lol). Yep. They had them. They weren't listed on the flu.gov site which had me a bit nervous but hearing of all the deaths and how horrible one strain of the flu was....I had them stick me. And Jim. Of course that didn't go without a hitch. The woman at the front desk made us fill out all these forms again. And for what? A flu shot? Did you lose my records already? The grocery store don't ask for all that. Same lady that said my appt. was lost and then discouraged me against making another one. Jim could tell right off she didn't like me lol :D  Feeling was mutual :l

Not much done in reno's lately other than the flood lights and sheet rock. Glad the fluorescent lighting is gone out of the master bath. I think it will eventually the house will show nice and flow well when we are done. I had no intentions of moving from here when we moved in 3 years ago but between the stairs, and no services  of any kind (yes....ATT is under 1.0 again so I am having to drive an hour away or order stuff off of QVC lol!). Pets, vets, docs, and internet will be on my list of needs next move (if I'm lucky enough to escape).

For now....just posting some more aerial shots of the atolls, reef, and blue hole off of Belize, some birds I shot or whatever I come across to add to this 'hot mess'. Thanks to my little 8 year old buddy, Carlos, for pointing out the Jabiru from other storks and herons, etc. Was pleased I got a shot of an emerald hummingbird although it wasn't a very good one. My first intention was to put some of Paros up but couldn't find the smaller digital camera. Probably in a pocket lost in one of the barricades of laundry around here somewhere :/

Till then... I am still very behind on my correspondence. Coming home with laundry and health issues only to face a broken washing machine wasn't on any of my lists :\  Still have some friends, my daughter, soldier, and others I have to catch up on. Did finally hit services last Sunday and catch up with my neighbor lady though :}  Just trying to leave the static behind and not have it barricade or 'cling' to me as I move forward into the New Year! :D 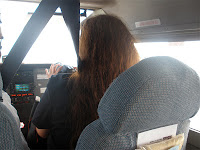 When I was younger, vacations were romantic in nature. Then there were the children and they became fun with trips to Disney, renting cabins in the mountains or beach house in Florida with the family. But when they became older, vacations were more adventurous and we were able to take them to exotic places but I have to admit....the one this past December encompassed it all; romance, fun, and adventure.

However, when we got back, I was holding Paros and Annabelle while Jim got Bayou. They were afraid to get him so the owner said he would do it. All I know is he came back into the lobby empty handed and Jim said they just let him out lol. He said Bayou walked slow toward him like he ruled the cell block!! Omg. Our little monster puppy :/ We are used to this and understand but Paros was wet and reeked of urine. I was a bit concerned about him being wet and cold so I took them home to bathe them that day, only to find he was sore with what felt like a bite mark on the side of his face under his ear.

I had to wait a couple of days to allow him to let me shave there and see what was going on when I came down with a rash across my face so I ended up Christmas eve night and Christmas morning in the ER looking at the vending machines saying "Look, honey! Christmas dinner." I only found that funny because we had a blast and celebrated Christmas early. The laughing ceased when Paros bite mark became abscessed and so we both were on antibiotics for the past 2 weeks :((((( I have to take him in and see where to go from here although it is doing better and he will let me clear it a bit and lightly touch it.

I assume they were stressed at the kennel and Bayou went to attack him like he usually does Annabelle and me :(  What appalls me is they just hosed down the kennel with him in it and failed to mention of any incidents. I just hope I won't have to take him into the specialists in Memphis.

Even though we had a blast in Central America and the islands, we won't be going anywhere without our dogs. Paros is my treasure and reason to come home. He is my heartbeat and I would give the sight on my afflicted eye that developed a skin disorder due to the stress of that mess for his well being. I know I'm not the only one who has found the love of their dog to be the greatest joy that this life has brought them. Their love is loyal and true and they are dependent upon us for their care so the sacrifice is a nominal price to pay.

Other than that, the only stress has been ATT right before the trip, and there was a several hour delay (about 7-8) boarding the ship due to a fog. Glad they are safety minded but a bathroom would have been nice after all the shops around Tampa had closed. I also like how they sailed beside another ship along the whole journey and they really set us up well. The balcony was huge and we had a blast back and forth with housekeeping and their 'towel critters' :D  They would all run to our room with their boss to show what we would leave them each day and we tipped them extra not only each day, but including the gratuities in our fare along with an extra check and cash in the animals paws :)))))  I even bought a book about creating them for my granddaughter and left them creations I do with my silk ribbons not listed in their book ;)

Lots of correspondence, bills, finishing off doctors, cleaning, and unpacking to do so hopefully I can talk about the good stuff when it's all clear like how my hair got caught in the window latch and opened the plane window lol, or the monkeys and birds that would come to me and crawl on me, the 3 cloud formations shaped like hearts, 2 shooting stars, and how beautiful the ship was with it's new renovations and chapel.

As for the New Year, I love how the world brings in the new year with their firework displays. It was touching to see the marine united with his wife at the rose bowl parade too on New Years day and our healing. It's a good start :}