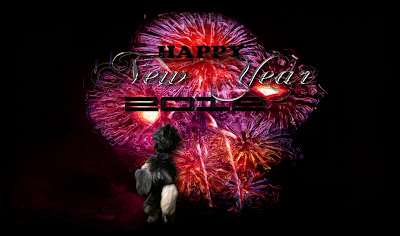 ﻿
May this new year bring nothing but optimal spiritual, financial, mental, and physical growth to us all. No 'Aflockalypses' and hope if the mayan calender is correct...may we discover it brings exceptional changes :)
Safe Journeys and New Roads to all
Posted by Tobin at 3:09 PM

.
One Christmas in Louisiana.....there was this biker, a cajun, and a little creole queen....

Well...it sounds like the start of a joke but it is where and who we spent our Christmas eve and day with :) After seeing my baby brother and his family, we learned my oldest daughter couldn't come so we followed yonder star being the nomads we are and headed home to New Orleans. Although my intentions were to attend mass at St. Louis Cathedral in Jackson Square and eat at the Fairmont Hotel...Jim's vacation was cut short and had to head off to Atlanta today so we spent it with friends in LaComb. Both of us old school discards have more history in that state then any other states put together so the journey and road themselves are an open familiar friend that led us to a place under the stars that felt right. Not to mention Paros is such a rider and ready at the back door to roll when he hears the words "Let's Ride". He loves the attention from others and prances with his tail and head high eating it all up ;). And meeting other dogs traveling on the roads during Christmas...you'd think they were his gifts (not to mention all the Christmas chicken he can handle) :9

So even though this is only the 3rd time I put up a tree since the terrorist attacks (the other 2 were the first year we blew up here from the Gulf, and the year we got Paros and my youngest daughter came to visit)...it will signify the visit of my youngest brother and end of war. With my parents deaths...not much family left here anymore. Some estranged, others scattered, and then those we don't really have any bonds built with. A brother and cousin is always nice to hear greetings from and keeps this place feeling a bit like home. 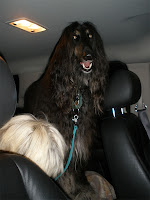 Of course it was nice to run from our water issues that are still occuring and Charleston's 'Prom Night in Mississippi' being shown in Washington this week giving it national attention. Yeah...the county commissioner who is my new nemisis did give us some pressure during Thanksgiving week and then again this Christmas week but thoughts of all the 3rd world countries I've visited and returned from without contracting dysentery....wouldn't you know it would get us good here :/  So we bought a water cooler but I relapsed after drinking a soda from the melted ice :( I did have to shave the Shih Tzu, Annabelle will have to be clipped, and I'm still struggling to save Paros coat I've been growing for the past 2 yrs. and still want to have him shown). 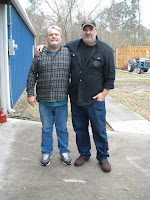 And how congruent that the friends we visited down in Louisiana had NO water at all! Their well went out and won't be able to have a new one dug until the first of the year so we could relate! D is a better 'wing it' cajun coon ass than myself so I knew she'd have her routine down in the kitchen and not to trip her up while I visited and allowed the guys some time to themselves in the shop. I just would throw a party platter and fudge to kibble on we had brought down.

And just ooohhhh why couldn't I figure the new camara out Cmas eve when Caveman and Big Jim put together a 4 yr olds electric scoot? Nothing like 2 huge bikers a a small cajun woman around an electric dirt bike the size of a tricycle :D Not to mention another 2 smaller couple hooking up the basketball goal. It could have been worse though. I could have gotten up in it all with my high BP misfiring brain stroke self blind as a bat with short fingers :/  Weeee. :l

But I saw the love D has for her grandchildren when I saw their house. I let her grandson know Santa could see the house from way up by yonder star ;)  And her grand fille with her precious creole princess looking self in her first Christmas dress! Totally awesome and heartwarming :}

When we stopped, I didn't even count my blessings. I was just aware of them and know they are too numerous to even begin to count.  I am thankful for the time I spent with good people who are sound, warm hearted, gracious, and tolerant to accept two wandering nomads off the road from blowing in the wind into their home. I also thought if I had issues taking the extra XBox back...maybe David could take it to the SOS clubhouse as a present to them. It's there Boar's son got me hooked on video games years ago lol ;)


God bless them and all the other good people who took time for their friends, family, or strangers to make this a blessed and memorable holiday.

.
Thank you, Stevie Nicks :}  Soooo bought...several copies. Merry Christmas and from us who see everything so 'Blurry'...Christmas, New Years, Valentines, to Mardi Gras...you did it! When I thought your most creative pieces already came to fruition :} Happy Holidays, Christmas...you captured our soul through this one ;) 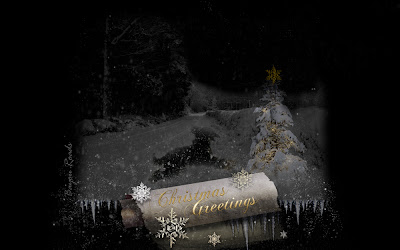 Photo of Paros from Feb snows this year, tutorial, tree, scroll, and icicles from Alexandria at Alfoart, snowflake brushes from fellow deviant (link at alfoart), Chopin font, paper texture from 'mytextures' overlay the scroll.
Hope to post before Cmas but crazy busy this time of year. Registering everything and on the XBox Kinect or PS 3, decorating, studying the smart TV and my new 18 mp camera with lenses (thank you Jim XO!) etc. Shopping thwarted with the news from peridontist (which is a keeper ;) for another 6k of work so sutures in my mouth for Cmas week :/  Also working out matts that formed from the 6 weeks of no water pressure here but BP down after we finally figured out the ISP problem (and had to drop to 3.0 but still not stablized. Atty problem now :P).
I guess my journey will be with me sign languaging like a chicken flapping on wii across the road :l
Till then......Safe Journeys :}
Posted by Tobin at 4:47 PM
Newer Posts Older Posts Home
Subscribe to: Posts (Atom)