DRIVE UP FOR DOG WASH

Really thought I'd finish stuff up and meet that doctor but when I drove to the closest office an hour away (that can not even draw blood from there), no one was there. I called the office further up the road by 45-50 minutes and they said they called to cancel with me so I told the other elderly lady waiting with her son who drove down from Memphis to pick his mom up...then back over to this doctor. They said they didn't receive any cancelation call either. I went on to lunch with a sister and when I came home...no cancelation call. Just confirmation on phone recorder AND email! So I was lied to, have been having nightmares of this doctor chasing me with a bat or big sword because I wanted to call the police on him (more like lawyer on insurance and him, write and print dozens of letters and send them to congress, news stations, anywhere else others have been telling me). This is just criminally negligent at this point and I think he was probably shut down because he has no license there. Will probably get them during this shut down or something.

Another person says to send them the bill. They charge and reschedule me even if I am 15 minutes late. Reason why I got a car after Miata battery died :/ Saving messages and with my birthday this week...just going about what I normally do. What else can I do?!? Shop, eat, drink, sing, and maybe dance if I am up to it. The song that I've been singing for the past 2 weeks is "How Soon is Now". Jim will be in another part of the house and think I am calling for his affection when I get to the chorus of "I am human and I need to be loved..." Omg lol...I snap out of it and just laugh! It's just How soon IS now? I've been waiting for 2 years now...after it took insurance 6 months to find an operating # with a doctor at the end...2 hours away...it's taken more than a year and I STILL HAVE NOT SEEN OR TALKED WITH A PHYSICIAN! WHAT THE F*ing HELL?!? Yes...God hears and knows it and I would not, nor have I, refrained from telling the priests or pastors that I'm in FIRE WORD BRIM STONING mode! :P

The other song I've been singing for the past 2 days is "Wonder" by Natalie Merchant. I forgot most of the words so came in here to listen to it on you tube because it was driving me nuts! A friend had to shave her head and start taking chemo this week but I believe she will make it through this. She is under great doctors care who are treating her NOW...not 2 years down the road :(((( Hell...even my general doctor is mad and I think he has dropped my insurance company (United Health). She has combatted and kept her diabetes and MS in check, run the MS bike events up in Canada, was chairman of MS society in Canada for a long time, etc. Caring, smart, sweet, sensitive, strong, sociable, AWESOME soul! I adore her and pray she beats this.

I'm leaving my bday song up by the who because I hope to go shopping then hang here for the weekend of the actual day. It took all of my energy to groom the dogs and shave Annabelle down so I didn't feel like taking any pics yet. My symptoms are worse and growth in neck was pressing on spinal cord making me dizzy at the same time the ruptured disc was pressing on the nerve that runs down my arm so I couldn't even lift my arm up for a week. Glad the dogs are done though and it's national dog day so I'll have my pals hang with me the rest of the week :))) 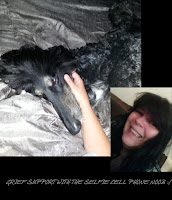 And poor Dyson sees from their end of my bad luck. We don't know what happened to the first part they sent out but the second was involved in an accident. Then they said they were going to send it out. For a week :/ Then UPS says it was damaged too :l So they are sending out yet another one while in the meantime I am using the smaller dyson upstairs, and the clunky tank like Kirby (Royal)...which is really awesome suck power but is heavy and spits stuff out at me :(((( I just ignore the other end of the house except to come into the office which is still terrorized with paperwork and the foyer/kitchen/dining room stuff still piling up in the den to do the floors...one day (omg). (photo shot earlier of my boy Paros. He always knows when I am down or sick and is my best bud!).


Till then...bed rest with 2 TV's, PS4 and PS3, cell phone, lap top, and my BFF. So game on with ESO and photos of the sign behind 'Coon Dog Cemetery" in Alabama from the post below as well as the dog wash on up the road :)
I now FEAR this doctor but it is all I have...or don't have. What is the $600 per month for?

Seems like the whole world is on a twitter, Facebook, quinoa eating, texting train. I still prefer mail, emails and thank heavens for this blog (insurance purposes, journal to date events which I find I am pulling more each day). I also keep the practice of taking food gifts to local businesses that I'm appreciative of like my grandmother and others so I took a cake and good package of coffee to my bank, then pulled in to take the small local police dept. a cake (I usually take coffee and fruit or cookies)...I was met head on by the day shift who does not know me at all. I wanted to make sure they had some because of the heat that seems to make the crime rate go up. I guess these practices are obsolete these days because they seem to be confused. Probably thought it was a bribe or something lol but just appreciative for when they come out to the house when the alarm goes off and keeping criminals off the street. They really do have a stressful and rough job that puts their lives at risk every day.

So with temps like 101 not counting the heat index, it's not surprising I'd pull up to a squad car with a guy laying in the back seat. Probably drunk but what a horrible time to say 'you're appreciated" :/ Not as bad as a sibling who was in drug court when a guy flees with officers from the court chasing him on foot though. It made head line news. Nothing like a little heat to make you want to escape drug court only to be captured the next day in the same town's McDonalds lol. Maybe they should give him extra charges for 'stupidity'. Maybe the heat melted his brain. I keep looking for 'trails' of myself from the car to the bank, insurance, or store :l

My plants are suffering too. Lost a few of them. Not sure if it's the heat or if they are over watered. I think I will need to do some research and segregate the plants that need lots of water from those that don't because I've just been turning on the sprinklers. With the bed rest I've been doing to get well, I've just been playing Elder Scrolls Online but then when I'm fine...I maneuvered my neck to where it
has been pinching on a nerve running down my arm again so I can't lift the left arm. Again :/ As long as I keep my hand below my shoulder...I'm all good! Trying to push it back until I can go see the chiropractor. Hope he can help because it's a flat out NO to nerve blocks from the neurosurgeon with not much to say :/ (Bayou feeling my pain and drug his bed by me! Even his squeak toys...one by one :) ).

But we are really looking forward to hitting New Orleans with a balcony in the Quarter. Wanted to stay overnight at Myrtles Plantation but with deposit making each room $500 a night was scary in itself so we'll do the Quarter thing before cruising off into the Caribbean with my eldest daughter and her husband. Also got a deal on 4 nights in Gatlinburg so taking the dogs to the smoky mountains for vacation next spring. Not sure about Europe with all this billing mix up from the hospitals. I get to stop by after a doc appt. tomorrow and see if they located where they put my money :/ Weeee. Nothing like a weekend kick off working at another's mistake. At least the lady checking on it seems savvy :))) 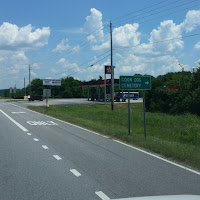 Kudo's to dyson again! What an awesome company. Looking at the 3rd machine for the house...the stick one...for quick pick ups and turns into hand held car vac. RARE you find a product that WORKS AND HAS SERVICE!!! Really makes like easy!

Not sure what we will do for our birthdays this month but excited enough to get away to NOLA and Caribbean! Maybe we can see some old friends down the road in New Orleans and do the Myrtles thing making a few new friends with some spirits! Doubt they are as scary as some of this mess here in Mississippi or the traffic jam in Atlanta! :o More peaceful in the country with no services and inept ones when you do find them or crazy traffic with endless sea of concrete and buildings sprinkled with crime and road rage?!? Hmmmmm.
﻿
Happy birthday to us, Jerry, my father (rip), Memery, Danny, Tammy (college/chem mate) whooooa....toooo many of us Virgos!! PARTY! :D
Posted by Tobin at 5:09 PM
Newer Posts Older Posts Home
Subscribe to: Posts (Atom)