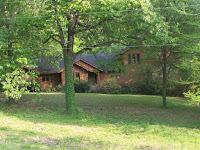 Last post was the day my neighbor conjured up some hair brained scheme to take his wife and go storm his sisters house with guns over a facebook post. I'm so sad to report my neighbor lady I prayed for was shot and killed while her husband and his sister just sustained bullet wounds. I think of the blog post I published along with the photo of him blocking the lane along with another one or two posts of the disturbances here (explosions from the basement, getting caught with meth on school premises, children riding atv's all over lawns when visiting) and prayed for them. I hoped that when she lost her job, she would beat this addiction and regain her standing. Just whent I would hear her yell out to him and reign him in to control some of his madness across the acres...I thought they had this monster behind them. Traffic wasn't so crazy over there and all seemed ok then nothing. We thought she had moved out from him when we didn't see her for more than a month but maybe she was just tired and depressed from fighting a losing battle or injured because others say she never did leave him.  I cannot imagine the heartbreak her children or family must be going through but hope they know she did try to clean the messes he created in their lives before her death.  I pray for the family now, and although they detained the neighbor guy for capital murder (death ensued while committing a felony), I pray he remains there for a good bit until he can beat his addiction, gain insight, and counsel others.
﻿﻿﻿﻿
So I've cried for a girl I never met face to face but I have met her husband and while he seemed nice at least, I cannot help but admit he scares me. If he has done this stupid act over a facebook post from his sister...what about me, a stranger, over a blog? I will continue to practice my freedom of speech, or telling of the experiences that cross my path. True recovery comes from admittance and the ability to talk about things in order to process it all. So I've been tweaking my security and had the electric company add a security light as well. I've also been busy supporting a sibling on their second year of sobriety via drug court and now see them also on the road to financial recovery as well; building credit, new car, new friends, new job, etc. but see at the same time, another one slip into the grips of addiction. These are bigger issues than the corrupted and/or rip off services I've been experiencing that  have affected me so I hope to find some counsel that will help learn how or what to say when I cross others with these problems.
﻿﻿
ATT and the electric still has their power outages (servers out, lines out...too many reasons to list here) but the water pressure I was experiencing in August that made my pipes sound like Linda Blair living in them led me right into the doctors office with broken toes and foot sprain after flushing a toilet. It sounded like it was going to explode and made me leap into the air stumbling over nothing and flat facing the floor. I had just paid my car tags so perfect timing because I could legally drive to that doctor lol! But what really has me laughing (after the initial shock and disbelief) is when the woman for the state health dept. told me that they are too busy digging in holes to fix water lines to call in a boil advisory alert (do they not have speed dial?) and the noise in the plumbing is how they know it is 'Boil Water' time but here is where I can't help but roll with laughter! When I said "I guess when me and the dogs get sick, we'll know" then she replies "Dogs don't get sick from contaminated water" so I asked "What makes you say this?"......wait for it.......she replied "Because they eat their own feces" :l Omg in heaven! Really?!? When I told the vet this....he just dropped his head lmao! Very nice lady but right now I don't know whether this state threw her this job because #1 they need a scape goat, #2 they don't care, #3 they are desperate ....or God knows what :l
﻿﻿﻿﻿﻿﻿

And Paros scratched really bad in September. I found a flea on Annabelle so took Paros in to see why his coat is dry, falling out, and has 3 bald spots. And his saddle has never stripped out this easily. Flea allergy both the veterinarian and I think so decontaminate the property time again it was but I fell silent when he was quizative on what was in the air. Dare I mentioned the crop dusters (who've actually been good about not flying over the house the past couple of years) or wanting to check the floors for Chinese glue containing too much formaldehyde? I just stared blankly out the window and could not bring myself back down to earth and answers him with even an "I don't know". So I get to test the floors but when it comes to my best buddy Paros...it's not laughable. Call it more of a neighbor with the FB post issue :/
﻿﻿
But the online gaming keeps my mind off of the craziness here and gives me something to do while my foot healed. As much as we love this house (and living in the peace and quiet again since the explosions and shotgun blasts have ceased), I know I still need to move on. I am getting older and this home with it's wonderful vibes I think come from the others who passed here, leaving good memories in it, is too big for me now. I had no idea I'd age so quickly here in the past 8 years. I look down on my Paros when he is resting his head in my lap at night and wonder where did they go. I think sometimes that if Paros was to pass...it would make me want to remain here. All of the memories we had together would have been created right here. His love for barking at the garbage men on Tuesdays, his walk abouts marking the front 3 acres, his learning "EASY" when using the stairs, him knowing we built that dog house for him, etc. And it is looking awesome with the walkway, gardens, and hope to get to the French doors and decking done! Will have to put a photo here one day...maybe Christmas when it's decorated. Looking for snoopy this week...hopefully dressed as the red baron lol :D
﻿﻿


Traveling now and then reminds me that there is intelligence beyond this place. Ephesus with the 3rd largest ancient library in the world,  Athens just steeped in history and democracy, Malta and their love for Saint John, even Rome, France, Spain, and how the Greeks retained their history up in the monasteries built on the cliffs in Meteora. And the US has the largest library in the world! We may have mad arrangements with the rest of our vacation time to be here at the house next month taking care of some more renovations but are planning a trip to Asia or South America to Machu Picchu for our next "Get me the hell outta here" venture. Personally I am hoping for Asia with a 2 day layover in Athens but have my sights on jeeping to Angkor Wat and Ta Prohm temples in the Siem Reap province of Cambodia. GetYourGuide.com seems to enhance what to expect with sights, history, time, etc.  The other ports of call are Thailand, Japan, Singapore, Viet Nam, etc. And it would be a dream to take Paros to board with his breeders and visit them with the layover!

Yeah...recovering from everything that has hit me while living here has been long and slow. I am still suffering it too but not as much and I am still bitter over the disabilities it has left me with. The biggest hurt has been the time it has taken from me and my dog.

Then I see my boy smile when he goes for his walkabout on the property or chase down and bark at yet another invading animal from the woods. My good and happy boy, doing his job! All is right in the world in these moments :)

*I should note here that there are a few people outside of my doctors that are respectable, educated, and good people. Most of my neighbors (one who is planning her first trip to Italy this year!!!), my pharmacists (whom I adore discussing travel with!) along with a few others. I was VERY surprised to find this to be true from one of the people online whom I game with. The most respected person from this game happens to be a younger vet living down the road lol :D Ironic, huh?