HOLY ROCKS and HARLEYS TOO! 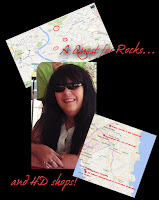 Once again we are blessed to embark on my holy land journey but with all the trouble in Egypt and such, they dropped Turkey from the itinerary :( My orginal plan since my early 20's was to start in Athens Greece, then Santorini, Turkey, Isreal, Petra Jordan, and ending at Port Said in Egypt. Our route this trip is the same as last but with the addition of Athens and Rhodes Greece, and Malta. So much for Turkey but I'm excited about seeing the Azure Window on the island of Gozo next to Malta where we dock (photo here along with Meteora Greece from Wikipedia...photographers credited by photos).

And I think that is what inspires me to see other places in the world; photos of places that move me. When I see a shot someone has taken (mainly National Geographic), I am compelled to stand in the spot that photographer stood and see through their eyes the scenery that moved them and myself as well. Like Meteora...a bunch of towering rock that were awesome enough for monks to build their monasteries away from civilization bringing them closer to God. Both are UNESCO world heritage sites. We will pass another along the way, the Blue Grotto in Malta, and also see the Fraglioni rocks and blue grotto of Capri Italy once again (my pics of that here...although some not so good). We just laugh about our 'quest for rocks' :D (and volcanoes, jungles, mountains...anything of nature that spiritually moved mankind for millions
of years like the Theopetra cave in Meteora where both neanderthals and homo sapiens lived). Can't really say why we've added the Harley Shops of the world to our list.

I hope my computer and internet holds out. Lately AT&T had issues and crashed my computer. Funny thing is that after I called them...they were back up before I got off the phone! And after 8 months of PLEADING to them to get our bank information out of their computer systems, Jim had to take a day off of work to set up a secondary 'main' account we transfer money from. We kept the old one just to pay bills from because why give AT&T a new account number? They'd just screw up and save that information too! The crazy thing about the whole mess is that about 2 weeks later...'poof'...all of my information was gone from their system! So I had to tell the robotic man all of my numbers all over again :/ I think the women at my bank maybe had something to do with this? Maybe AT&T's disease spread from me to them and since their voice is stronger...AT&T remove my info (wooo hooo!!! :D ). I deliriously laughed soooo hard that it took 3 times calling them to pay my bill because I was not coherent to the robotic voice!!

﻿﻿
As for my health...it's ok so far. I wouldn't say I graduated from the ear therapy dizzy class thing but I didn't flunk nor was expelled :) I think it was a stand off :l She got my calves built up and a lot of pressure from my ear to where I am sure footed and not woozying around as much but I did develop a constant ringing in my ears since Easter weekend and the whole left side of my body is like on another planet and doesn't co-operate with the rest of me. Every once in a while the disc and pressing on that side of my head and neck lets me 'feel' parts on that side. Or maybe it's the nerves growing, or maybe nerves being pressed...who the hell knows...I'm just going about life and very blessed and happy I may be out of the liver danger zone thing with the impending 'death sentence' imposed on me by the nurse who kept saying there's hope and I was just hoping to see a doctor for over 2 years while one lesion multiplied into several...etc., etc. I have a doctor now and I'm living my life the best I can until told otherwise...and that comes from our father in heaven so :P lols :D!

Well...until then...GO HILARY!, Paros had to be clipped for his 3rd time because of my arm, I will be able to ride the Indian now and pick up on renovations here at the house but concerning the trip...I have to tweak the security system, Jim hit a turkey and knocking out his windshield on the way to Atlanta (Co-workers said it looked like he 'posed' it for CSI lol :D),  find drivers for Rome where to rome .com is having website issues :/) and Greece, hit 2 doctors, and find another house sitter as well as making reservations to board the dogs :/ Our friend in Louisiana may spread the word and help us here.

﻿﻿﻿
As for the 'good stuff' I think I failed to mention since Christmas...we visited friends, one is the oldest living sons of silence and Germany Chapter brothers went to visit him too. My daughter moved a lot of stuff out of the house including her bedroom furniture (took a trailer load :/), my stepfather is loving Florida so I don't worry and hang out 'on standby' lol, and a family in drug court is recovering beautifully (I also heard the news about Peter Murphy and hope he recovers from his troubles). And I LOVE my bank!! SERVICE with LAUGHS so lots to be blessed for :)))Seems it's just the little nuisance stuff like Jim hitting the turkey that knocked out his windshield, delay in renovations, daughter getting divorced, youngest daughter moved to address unknown and I don't hear from the grandkids, etc....but we are all alive, in good spirits...and semi good health ;)