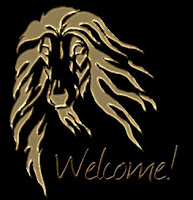 5 boys and 3 girls were born to my breeders 3 Graces Afghans in Greece today. Under a leo sun with the vet in attendance for several hours so a cream girl is having difficulties. Evi is not the kind of breeder to cull her pups but will be up for days nursing her. This is the one I would love to have and spay but would have to wait a long time till she could fly out. It would be perfect for me although she has a home with the owner of a sister of Paros and will be close by to Evi. She is ALL heart!

For 2 days I've been 100% at this computer and none of it work. One was like an online Alejandro day with swapping photos of males, drinking, on the phone and trying to figure out what gender exactly is Lady Gaga lol. I will have to remember to thank Evalina, owner of another sister to Paros, for this day!! And to Rick Dor for confusing me of her gender due to the name!! But today was all about the puppies and with a 100% turn out...this is awesome :)  Tomorrow with be pup pics and blog titles 'Left at Alejandro'!

To the old friends that awaited the pups arrival....and to the new ones I made....belonging to a group of  Pet Pal lovers is the best clan of all :)

I've been down for more than a week now. I've resigned to the fact that the computer guy has abandoned me and I am stuck with just one computer which I will have to take in and reformat. It has been others on FB and friends to tell me why some docs won't show, AKC from Carolinas rejected my scans because they weren't clear enough (software isn't on here but can use some round about way...obviously it isn't good enough), not to mention all the software I paid for and a virus scanner on a computer that isn't plugged up. Waste of money. I'm claiming a loss and between IRS, PS, Virus Scanner company, Microsoft....they will be well informed. Especially since I can't update until this is fixed.

I haven't been without moments of laughter that could be taken for bouts of delirium though. The joke/cartoon was edited and given to me by Jim and I call it 'Joyce and the Greeks'. At least some people have services :/  I know not all areas in the south are this incompetent. It just comes back to a rural choice. I was hoping to work with some of the younger people here but I am known as a finicky shopper and my expectations are too high to accept substandard services or products. In gathering links for a site I was working on...I noticed that 75% of the Afghan Hounds here in the states do not even possess a ring in their tails :l  Bad enough when they don't even have a web site....and chasing down a good breeder while on the road showing in the ring can be expensive since most won't have a litter on the ground. 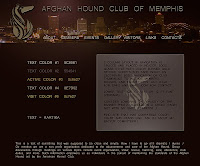 I should be good in the hound dept...minus the handler and groomer. I did have a nightmare that all my breeders puppies were girls and woke up when my computer crashed clicking on her post to ask if this meant 'minus the male I am looking for'. I actually wouldn't mind a female...just NO PUPPIES. That would be about like hearing I am pregnant at 50 :/  Just one more time to train a dog not to hump the 3 year old kids in the family and save them from hysterically laughing while pinned against the wall! Omg....and since Paros ate a chair...maybe it would be a good idea not to have sleep overs in the den with the leather furniture :/

Well...I may not get my computer done by August but I will attend the Afghan Hound Specialty show in Southaven. I hope my first choice in pups works out ok and all goes well but things happen and plans get zapped. It will happen when it is suppose to happen but I intend to take care on any future burns down the road. 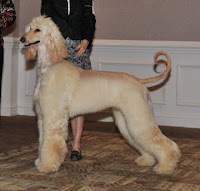 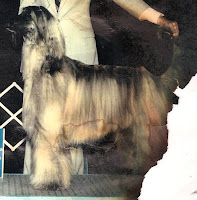