Always going down some rabbit hole here but when we took Paros out Sat. for his birthday, Groomingdales was a small shop and no day care facility visible. It was ok though because he was due his weekly bath and I didn't have the heart to do it on his special weekend. I informed them of his protest against having his nails done and asked them to groom him on the floor and not walk him outside since they were located on a high traffic street. He would outsmart them :/ Fairly comfortable...we set out to shop for supplies.

While shopping, I decided to buy the Alice in Wonderland DVD. I had no idea Johnny Depp was in it or that is wasn't animated so I was really excited about my purchase!! Especially since my daughter and I adore Lewis Carroll's stuff. She was reciting Jabberwocky on her own as a child. I taught her guitar and loving 60's music...she was singing Grace Slick's song "White Rabbit" and sang it at her schools talent show before the age of 15. She did not need any rehearsal according to her chorus teacher but the principal had her change  the line "Feed your head" to "Heed your head". Awesome idea ;)

I also have been scrapbooking digitally and gathering charms and snapshots for a physical one too. Creative Memories will also publish a story book of your work so I have been working on "The Adventures of Paros" and taking screen shots of his jungle backyard with wonderland items bought from the game created by Zynga called "Petville". My intentions were to draw them with my wacom tablet and I have been downloading fonts, dingbats of mushrooms and flowers, and the Lewis Carroll illustrations for guides. My first attempt drawing with the mouse was horrid but the cat eyes came out ok. There are some killer tuts out there but too surreal. 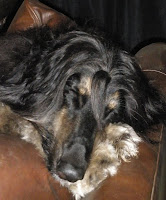 The day on the whole was way too hot to be out living in the humid south. Even today's national weather said Memphis was expected to be the hottest in the nation today with a repeat heat index of 110. We called to see if he was ready and they asked for a little more time since it took 3 of them to do his nails and that he had won (omg...I liked to have died laughing and thought I'd fall out in that hot sun!). Of course they did get his nails done and said he talked away to them and they would just respond (which is a good thing or because he is sooo demanding at times). Ready for the 2 hour trip back home, we picked him up and he was dead silent during the journey until we hit the country roads. He perked up looking for the neighbors horses and retrievers. We fed him chicken, puffed pet pastries dipped in yogart with a dish of vanilla ice milk and he fell asleep in the den early.

I think he was happy to be home. We were just too tired to watch the movie until the next day and fell out in the den too. When I awoke around 4 on Sunday morning...he crawled right up into my lap which surprised me a bit. I thought maybe he had enough of city traffic, horns, heat, groomers, but on testing him by saying "let's ride"....he bolted for the door ready to go down that hole again! 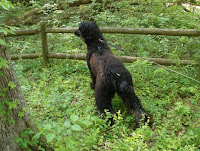 The movie was enchanting, graphics killer, and Depp as cute and mad as ever! And now I am searching for Avril Lavigne's music DVD/video of the movie. I'm with Paros. I'm always up for rabbit holes too ;) 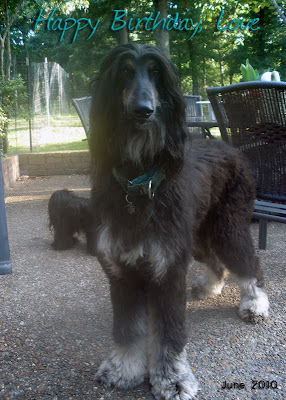 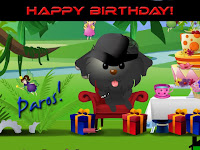 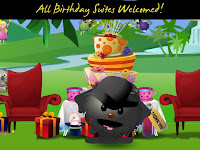 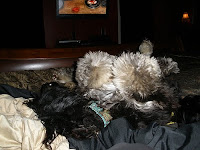 I've always heard the expression 'Let Sleeping Dogs Lie' but I don't think this is what they meant :l You would think with their cages in my room along with a VERY large pillow I made for the floor by the window (earlier post) this would not be a nightly issue retrieving my spot in bed. And just like children...they will race me to the sofas in the den as well :/  Of course my bed always looks like a pile of fuzz with chew and squeak toys as if they were bringing all their treasures to bed with them.

And surfing through all the pics of others pets on FB has me wanting to create another page for just the hounds and dog people so I can separate them from the games. I absolutely love looking at others photos whether they are of pets around the house, or champions stacked at a dog show! We will spend more time playing with the pets and enjoying thier company than watching TV beyond the daily news. 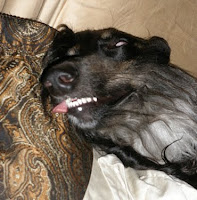 And how happy we are that Paros mom will have another litter! She was just bred last weekend and it was her first natural breeding (other via artificial insemination in the clinic) along with the male so I can't wait to hear of any changes in personalities they will develop. I had the virtual Paros create a nursery in Zynga's game, Petville, awaiting the puppies lol so we have had a lot of fun on dates, opening up and creating our summer beaches, and arrranging flowers during gameplay :)

Cesar Milan from the Dog Whisperer would scold us good but they already think they are people and these are passengers we don't mind riding through life with ;) 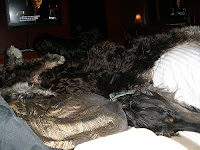