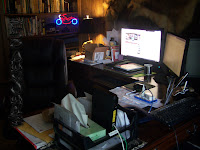 Omg...after purchasing AT&T Connectech services this week and throwing in the towel to reconnect all the equipment once I saw that the U-verse speeds were stable....I used them last night. From 4ish in the afternoon till 2:30 in the morning...bridging the router I paid a couple of hundred for to their modem/router...knowing all the time I read you cannot do this (except to my old Westell bought from Bellsouth that still works better than ANY of their equipment!!!)...the only thing I got was lost time, introduced him to media center extender location and how to minimize the window, showed him where the trouble shoot files where NAT moderate change of Xbox needed to be via UPnP capabilities and if not then by opening port 3074, my system not secured so missing services (tired as hell too) to reconfigure everything that was setup once again, and lord only knows what computer issues I had that I can't remember off hand at this time with only 4 hours of sleep :/  I did learn one thing. My blue screen of death came about because of playing more music videos than AT&T could handle (and if they could fix communication ports between media center and Xbox..or PS3 etc....I'd play my own music CD's :P). He says there is nothing to worry about that :l  Does that mean the other 2 computers that crashed with your equipment with IP host or whatever are ok too? We'll see what HP and Microsoft have to say about that. I hope the same but from what I'm reading....

So I searched for a tort atty. around here. I saw where there was already a class action suit against AT&T that has been settle with speed issues. Speed issues?!? Hell....I'm passed caring about paying for 6.0 DSL for 3.5 yrs and not even getting a 1.0 (and they outright lied to me all this time saying I was tooooo far from the damn call box when everyone else in the world was having the same issue!!!). I am into for a house I bought (along with money used for its renovations) with the contingency it would receive a minimum of 6.0, a 4k hard drive because the techs stated my computers were at fault, 2 new XBoxes I saw come and go in this time I never got to enjoy the features, PS3 (same thing), Smart TV...still can't update or use....hell...did I mention the shattered arm or BP I've suffered from pulling phone cords, checking house lines, utility lines...omg....no telling what else I did not list here! Anyone else suffer all this? Not the dumb little 1k or so fees of overcharges...but ALL THIS OTHER STUFF believing in their lies and still using almost 4 yrs of my life working hours a week researching, reading, troubleshooting, setting up home here! Damn I'm dumb!

And where is the manual to the Motorola NVG510 modem/router of theirs?  Hmmmm....I owe Ron Berman something nice for that ;) And I am seeing youtube info on doing all this but WTH?!? I had these services and everything was hooked up...why should I have to waste time doing more research on their inept services and practices and pay for it?!? I want to revert to my old original plan I had before they hooked up this U-verse crap :P (at least until I can get out of here).  And I really hate that the connectech program won't work for me because I found it to be an awesome value...uh....money wise anyway lol ;)

But what is it?!? Their people are nice and really do what they can....I think. What I also think is that it's the big heads up in corporation that know all this, hire and lie to their workers leaving them uninformed and banking that the majority of their customers will be the simpletons that aren't savvy enough to catch on (and I am one...but still a little further along than most) like the AOL masses that fell into that trap (thank heavens I did my research and was spared that atrocity). Sales will even tell you that my area had 6.0, there is fiber optics here (NOT), and won't tell you what you need to know yet I think they are reasonably priced....you just don't get the services you intended so therefore....it's a rip off :P And my computer is not responding so hot right now :(((((

Well, Jim is flying home today so I am at least posting his pictures of his weekend (games on beach, ball field, those who rode in) along with my wrecked out office with 10 zillion notes and notebooks, journals, instructions, coffee, caffeine, meds, etc. lol. I never mentioned where he works nor will I but I will say that I wish I had a dog sitter and would've flown out with him. They are an awesome, serviceable, strong integrity, honest, hardworking team that play together yearly by flying all the field techs out together to home base. They are now an international company with morals and yet AT&T just denied them service. I think it's because they know they can't deliver it lol :P  Yet somehow there are all those in forums, youtube, and with websites that will lead you around this mess and a lot of the world is enjoying their Xbox Live services, Smart TV's, PS 3's etc. except me :( Sorry babe....no Netflix, Hulu, Xbox Live Gold yet (and I doubt they will get it on the Smart TV or the PS3 either) :(((

Now normally I put on some music that is appropriate to my blog but I'm letting this one ride. I don't think they've created or composed anything sounding like a death metal band dropping F bombs with the decibels of their last apocalyptic show :l  I don't think I could handle all that anyway lol ;)

So I'm PO'ed and will be ridin' bitch alright. Out of here or with an attorney to court I hope :P
Maybe next year I can have stuff done and fly out with him :/
Posted by Tobin at 12:17 PM
Newer Posts Older Posts Home
Subscribe to: Posts (Atom)