JUST HOP ON OVER

Whoaaa it's been awhile since I've been in here! And with Easter hopping by not taking winter with it...I've spent a lot of time pulling all the plants in and out 3 and 4 times, Bot to mention the arrival of many bushes, trees, roses, and other plants I had to order from an out of state nursery I had to immediately take out of the boxes, repot, then throw them out when the cold seemed to be done with us here in the south finally. And yet I did have to bring some in that don't like it under 50 degrees last night because it got down to 39. 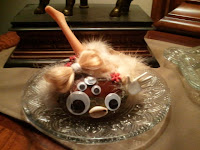 Then I had to let my new yard guy go I hired last fall, the cop :(((  Our regular guy just had a better price, keeps the lawn more immaculate, and keeps a regular schedule. I probably will still hire the cop for tree removals and stuff but his regular job keeps him busy (and he really is more of an excellent cop than gardener lol, moral, just, decent ;). So it's good to have our guy back and he grew up with the regular inhabitants of this house although he will run quick when he finishes so I can't hire him to trim the bushes, bush hog, fertilize, plant trees, etc. lol. He does weed around them and the fences and usually mulches the leaves in the winter though so I hope this year won't be as crazy. I'm still soooo busy I don't know which end is up sometimes so when I saw my sister's demented pet rock my eldest daughter made...I had her bring it in so I could steal a shot at least lol!!! :D 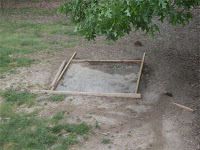 And while I we are hopping in the yard this spring, we decided to start on an early birthday gift for Paros! A dog house that will resemble this house with a twist!! He will be able to access the balcony part via stairs only it won't have a roof over it so he can sun and one of the wings (concrete not poured for them yet) will be for the Shih Tzu :))) I also got a dogwood tree although I will have to have them send me another because it was beat up in the mail pretty bad and I don't think it will make it :(  That's one great thing about cottage farms nursery...they guarantee their plants and trees for one year (via their website and QVC). 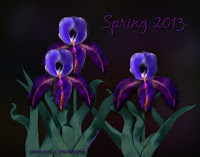 With the new BP pill and ATT fixed since Feb....I've had an abundance of energy so started finishing some of the bathroom renovations, gardening, trimming bushes and trees (though I have to opt for the ineffective charged trimmers vs gas ones because I can't start them or the blowers with my hand out :/), spring cleaning, taxes, etc. My hand keeps me from grooming the dogs efficiently along with so many other things and I may be slow but I get by. The new washer SUCKS and I have to wash everything twice like the dog blankets or anything that is heavily soiled. I miss my Kenmore with the agitator in the middle. It was like having a wash woman down by the river beating our clothes against the rock. But glad I opted for the top loader. I really would've been sick shelling out another $800. And for what?!? A good looking machine that doesn't work like the old stuff and will probably not last 10 yrs little on 20 :/ Hell...I don't even entertain in the laundry room so I don't care what the machines look like :P 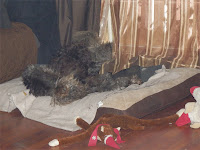 And the serta mattresses? Humph. So far I still like the Sealy but when they came to take away the old mattress...Jim had the Simmons Beauty rest from 1999 that belonged in the guest room on there. No wonder the guests were sleeping well :l  They were on my new mattresses :( Paros isn't too wild about his but they only had the pillow top in his size. He still sleeps upside down with his head in the drapes. Doesn't dare want to miss the neighbors dog going by! :D

Before I hop off I have had fun. Family, games, friends, working on the house, watching old bond movies, etc. I've been nostalgic and spinning some old 60's and early 70's tunes through it all too. I even got to play with Photoshop a couple of times this past week when it rained. Just winged it on one but the iris I tried to follow a tutorial over at pxleyes.com. Whoa! really difficult but I had a blast with it (even though it looks nothing like the original :( ). Some play time for me outside of the dogs and gaming on the consoles :)  I guess it's back to the gardens with crop dusters hoping over in a few days once April showers skip away but for now....some leather work and inside stuff ;)


Maybe next blog I will mention about my realtor/friend staying with us for a bit. Till then...hope all hop off to a good start this season and grow with love :)
﻿
Posted by Tobin at 7:14 PM
Newer Posts Older Posts Home
Subscribe to: Posts (Atom)